Wood Betony - Herb of the Week

Something ornamental has caught my eye, so I decided to make
Wood Betony or Betony (Stachy officinalis) Herb of the week

An herb with a long history that dates back to the Middle ages, it was reputed to scare off evil spirits.  It is in the same family as Lamb’s Ear (S. byzantine) but unlike the fuzzy-leafed edging plant, this is a colorful ornamental that attracts bees, butterflies and other pollinators.  Currently appreciated more as an ornamental plant, it actually has an interesting medical history. 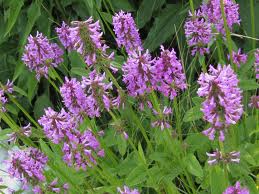 Historically Betony was considered a magical herb that could, according to the Romans, cure 47 different illnesses.  By the later half of the 17th century physicians were still touting at least 30 medicinal uses.  Among its magical properties was the ability to ward off evil.  In the Middle Ages it was planted in church yards and worn in amulets for just this purpose.  When I read in a British book, entitled Demonology and Witchcraft that “the house where Herb Betonica is sown is free of all mischief,” I almost reconsidered planting it.  Gone are the days it could cure bad dreams, gout, dog and snake bites and drunkenness, today its curative properties have been whittled down to a treatment for sore throats and diarrhea.  What I love about Betony is that it bears a unique resemblance to black tea in its taste. 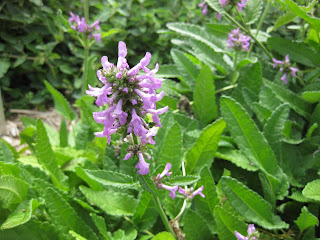 A perennial prairie plant that grows 1 to 2 feet tall, Betony is best in zones 4 to 8.  Sporting pinkish purple tubular flowers that bloom in a tiered spike, the leaves are bright green with serrated edges. The stem is square and hairy and does not branch so it has a very upright shape.   Betony requires little care except for occasional weeding.  It likes a deep, fertile soil, that is well drained but kept moist.

You can grow this plant from seed started indoors 6 to 8 weeks before the last frost (which in Illinois means right about now.)  You can then transplant the seedlings to the garden after the soil warms. But you can also sow them directly 1 to 2 weeks before the last frost.  You will need to thin the plants to 12 to 18 inches apart and divide them every third year as the can spread widely.

They need a well-drained, moderately moist soil of average fertility.  The plant will bloom, in early July, so harvest the leaves for tea before it blooms and hang dry them.

To Use
Although history says it can cure many things, Betony is really only good for throat irritations and diarrhea.  It tastes like black tea, but has no caffeine, so unlike real black tea is actually relaxing.  The leaves contain glycosides that lower blood pressure which makes it a great treatment for headaches.  The tannins in the leaves can ease throat soreness, but do not go overboard as those same tannins will irritate the stomach if used in excess (much like aspirin will.)

Make an infusion with the leaves and gargle with it for a sore throat.  Drink the tea to treat diarrhea.

Recipes
The only real recipes you can make with Betony are tea, but with a taste like traditional tea leaves it is a great foil for herb combinations.

Email ThisBlogThis!Share to TwitterShare to FacebookShare to Pinterest
Labels: Betony, herb of the week, recipes, tea