Anise Seed - Herb of the Week

To go with our theme of growing from seed, this week’s
Herb of the Week is Anise (Pimpinella anisum) 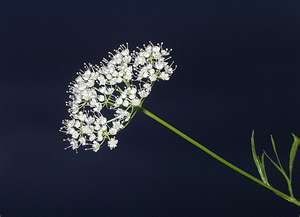 Also called aniseed, this is a flowering plant in the family Apiaceae native to the eastern Mediterranean region and Southwest Asia. Its flavor has similarities with some other spices, such as star anise, fennel and licorice.

Anise plant sometimes called anise seed is an herbaceous annual plant that will to 3 ft tall. The leaves at the base of the plant are simple, 1/2 to 2 inches long and shallowly lobed, while leaves higher on the stems are feathery pinnate, divided into numerous leaves. The seeds of the Anise plant are what give Greek liqueur ouzo is oomph as well as create a flavoring for licorice candy.  Anise has two types of leaves.  A small round toothed leaf when it is young, somewhat like flat-leaf parsley, but mature plant leaves are almost fern-like.  In the middle of summer (when it starts to get hot) anise will produce umbels of tiny-off-white flowers which will mature into grayish brown seeds that have a wonderful licorice like flavor.

Anise originated from Greece, Crete and Egypt. The Ebers Papyrus, a famous Egyptian medical manuscript dating back to 1500 a. c., lists anise as a medicinal plant. The Greeks considered anise a medicine, and the Romans favored its use in many seasonings and sauces. The old herbals had nru.ch to say about anise. They claimed that anise was both a stimu1ant and a relaxant; that it was an aromatic, diaphoretic and tonic; and that it was helpful fur lung and stomach troubles. Today, anise is still used as a home remedy: Anethole, the oil of anise, is used in modem cough mixtures, to help stomach ailments and to help relieve asthma and bronchitis. According to Pliny the Elder, anise was used as a cure for sleeplessness, chewed with alexanders and a little honey in the morning to freshen the breath, and, when mixed with wine, as a remedy for asp bites. Anise is a food plant for the larvae of some butterflies and moths. 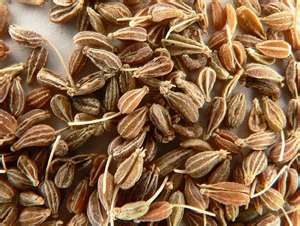 This annual plant is best grown from seed.  In zones 5 to 7 you can sow seeds directly in the garden in spring once the soil and air are warm.  In colder climates you can start them indoors.  In the south sow the seed in fall.  In all cases plant them ¼ to ½ inch deep and thin the seedlings to 8 inches apart.  They do have a weak stem so closer together is okay too.  They prefer full sun in a light, fast-draining soil that is worked deep and soft.  Kind of a picky plant, in hot humid weather it will die back or bolt and it does not like windy conditions or weed competitors either.

The first leaves of anise are round and toothed, but later leaves are deeply lobed. The flowers, which appear later, are white, delicate and 1acy, like those of Queen Anne's lace. Outdoors, anise grows up to 2 feet. Indoors, it seldom reaches more than 1 foot. Anise is a herbaceous annual plant growing to 3 feet or more tall.

Start the seeds in peat pellets or make your own paper pots (see my blog on how to make them), sowing thickly. Anise seeds germinate in one week. The seedlings do not transplant well, so thin them out to one per pot when they are a few inches tall. After the seedlings have three sets of leaves, transplant them. Place each pot in a 4-inch pot and place in bright sun to grow indoors.  Anise plants grow best in light, fertile, well drained soil.  If sowing outdoors, the seeds should be planted as soon as the ground warms up in spring. Because the plants have a taproot, they do not transplant well after being established, so they should be started either in their final location or transplanted while the seedlings are still small. 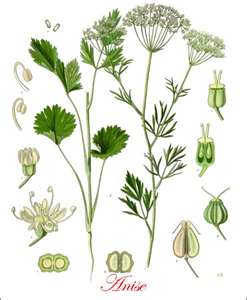 The seeds are the most commonly used part of anise plant.  They are easy to store and are great in the winter steamed with root vegetables like turnips, parsnips and carrots.  They are also a great companion to cabbage.  The natural sweetness makes them a good accompaniment to fruits, in muffins and cookies.  The fresh leaves lend a nice flavor to salads, sauces and soups.  It is used as a breath freshener after meals, which means you can use it well in desserts or after dinner teas.  It is purported to help with bloating, wind and the restoration of equilibrium when taken as tea.

The seeds, which have a distinctive licorice flavor, are used in bread, pastries, candies and liqueurs, such as anisette, Pemod and ouzo. In India, they are used in some curries and also chewed after meals to sweeten the breath and cure indigestion. The French enjoy the leaves with cooked carrots. You can also add them to salads and stews.

Anise is sweet and very aromatic, distinguished by its characteristic flavor.  The seeds, whole or powdered, are used in a wide variety of regional and ethnic confectioneries, including the black jelly bean, British aniseed balls, Australian humbugs, New Zealand aniseed wheels, Italian pizzelle, German Pfeffernusse and Springerle, Austrian Anisbogen, Netherland muisjes, Norwegian knotts, New Mexican Bizcochitos, and Peruvian picarones. It is a key ingredient in Mexican atole de anis or champurrado, which is similar to hot chocolate, and it is taken as a digestive after meals in India. Anise is also used in the Vietnamese noodle soup Pho.

The medicinal uses include the phytoestrogen anethole, which is also found in fennel.  This makes it a good treatment for menstrual cramps.  John Gerard in “The Great Herball,” one of the early herbals, suggested its use as a way to prevent gas.  There were some reports of using the essential oil has reportedly been used as an insecticide against head-lice and mites. Anise seed infusion made by pouring 1 cup of boiling water over 1 tablespoon anise seed and sweeten with honey has been used to treat smoker's cough. In the Middle East, water is boiled with about a tablespoon of aniseed per teacup to make a special hot tea called yansoon. This tea is given to mothers in Egypt when they are nursing.

Place the beef knuckle in a very large (9 quart or more) pot. Season with salt, and fill pot with 2 gallons of water. Bring to a boil, and cook for about 2 hours Skim fat from the surface of the soup, and add the oxtail, radish and onions. Tie the anise pods, cinnamon stick, cloves, peppercorns and ginger in a cheesecloth or place in a spice bag; add to the soup. Stir in sugar, salt and fish sauce. Simmer over medium-low heat for at least 4 more hours (the longer, the better). At the end of cooking, taste, and add salt as needed. Strain broth, and return to the pot to keep at a simmer. Discard spices and bones. Reserve meat from the beef knuckle for other uses if desired. Bring a large pot of lightly salted water to a boil. Soak the rice noodles in water for about 20 minutes, then cook in boiling water until soft, but not mushy, about 5 minutes. Slice the frozen beef paper thin. The meat must be thin enough to cook instantly. Place some noodles into each bowl, and top with a few raw beef slices. Ladle boiling broth over the beef and noodles in the bowl. Serve with hoisin sauce and sriracha sauce on the side. Set onion, cilantro, bean sprouts, basil, green onions, and lime out at the table for individuals to add toppings to their liking.
Posted by Marcy Lautanen-Raleigh at 5:51 AM