Tansy - Herb of the Week

This week’s Herb of the Week is Tansy (Tanacetum vulgare) 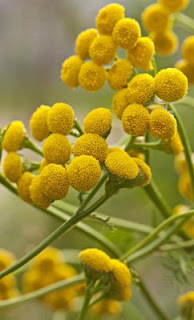 Tansy is a well known older herb that was used as a strewing herb which means in medieval times it was strewn on the floor to be walked upon as it was believed the scent would clean and purify a home.  Historically Tansy was used for culinary purposes and many old recipes can be found in household receipt books (old recipe books.)  It was especially popular in puddings, cakes, and egg dishes.  It has a bitter flavor, but was still popular in cakes and puddings, especially those made with eggs and cream that were served on Easter Sunday.
This herb is found in many older plant texts like Thomas Tusser’s One hundred Points of Good Husbandry of 1577. What I found interesting about this herb was that newly written books still like to quote all the old books which detail its historical uses, like “I have heard that if maids will take wild Tansy and lay it to soake in Buttermilk for nine days and wash their faces therewith, it will make them look very faire.”  (James Braunschwyke, The Virtuose Boke of Distillacion 1527).
To grow
A perennial that spreads from the rhizome, Tansy is a tall herb growing as much as three to four feet in height.  It has dark green, feathery foliage which is pungently aromatic.  At the tops it will grow button-like bright yellow flowers in the summer.  It grows well in dry, stony soil preferring much sunlight.  You can grow it from seed, division or cutting.
To Use
Having a bitter flavor and insect-repellent properties, it is still commonly used in moth repelling sachets.  Historically it was taken internally for intestinal worms, but is not used medicinally much anymore as it is deemed to be toxic.  It is a good companion plants as it tends to ward off aphids.
Despite a wealth of books giving cooking recipes using Tansy, it has an unpleasant bitter taste so is not commonly used this way anymore although historically it was used as a substitute for mint in sauce for lamb.
Please be aware that women who are pregnant are not supposed to eat anything with tansy.
Recipes
The only recipes I could find were old ones, but I thought the first was fun and the second useful!
Tansy Pudding
Ingredients
Directions
Source:  The Lady's Own Cookery Book (1844).
Moth Sachet
As mothballs are toxic, try this old fashioned, natural remedy to keep moths out of stored clothing, woolens and furs.
Ingredients
Directions:
The Backyard Patch makes moth repelling sachets with tansy and other herbs, if you are interested check out our e-store - http://stores.ebay.com/Backyard-Patch-Herbs


Every Wednesday  is Herb-of-the-Week day where  I feature a blog on a special herb, detailing its uses, growing habit and some recipes for using the herb.  As promised, not all herbs are truely culinary and this old-fashioned herb is definitely one whose uses are not for eating!
Posted by Marcy Lautanen-Raleigh at 6:24 PM