Halloween is populated with many characters the most popular are witches.  But Fairies are often associated with Halloween too, now most fairies are considered shy and withdrawn hiding in gardens and enjoying blooms, but a more mischievous version of a fairy is called a hobgoblin, often considered to be fearsome creatures, that historically just brought bad luck. But there are three deadly herbs that are often found in literature about Halloween Witches. Incense is often burned by witches and those conducting magic.  An incense made with frankincense, myrrh and dill was used to ward off hobgoblins.

A selection of other herbs are often associated with being used to create mischief as well, some are even poisons, yet still used in some magick and healing.

These three herbs are often called the witching herbs, perhaps because each can cause hallucinations:

Hyoscyamus niger, commonly known as henbane, black henbane or stinking nightshade, is a poisonous plant in the family Solanaceae. The name henbane dates at least to AD 1265. The origins of the word are unclear, but "hen" probably originally meant death rather than referring to chickens. Other etymologies of the word associate it with the Indo-European stem *bhelena whose hypothetical meaning is 'crazy plant.' Henbane was historically used in combination with other plants, such as mandrake, deadly nightshade, and jimsom weed as an anesthetic potion, as well as for its psychoactive properties in "magick brews". These psychoactive properties include visual hallucinations and a sensation of flight.

Henbane was one of the ingredients in gruit, traditionally used in beers as a flavoring. Several cities, most notably Pilsen, were named after its German name "Bilsenkraut" in the context of its production for beer flavoring. The recipe for henbane beer includes dried chopped henbane herbage, bayberry,  water, brewing malt, honey, dried yeast, and brown sugar. Henbane fell out of usage for beer when it was replaced by hops in the 11th to 16th centuries, as the Bavarian Purity Law of 1516 outlawed ingredients other than barley, hops, yeast, and water.

In 2008, celebrity chef Antony Worrall Thompson recommended henbane as a "tasty addition to salads" in the August 2008 issue of Healthy and Organic Living magazine. He subsequently said he had made an error, confusing the herb with fat hen, a member of the spinach family. He apologized, and the magazine sent subscribers an urgent message stating, "[henbane] is a very toxic plant and should never be eaten".

Plants like Henbane should only be collected and used by people who are very experienced.  The plant H. niger is susceptible to considerable diversity of character, causing varieties which have by some been considered as distinct species. Thus the plant is sometimes annual, the stem almost unbranched, smaller and less downy than in the biennial form, the leaves shorter and less hairy and the flowers often yellow, without any purple markings. The annual plant also flowers in July or August, the biennial in May and June.

The annual and biennial form spring indifferently from the same crop of seed, the former growing during summer to a height of from 1 to 2 feet, and flowering and perfecting seed, the latter producing the first season only a tuft of radical leaves, which disappear in winter, leaving underground a thick, fleshy root, from the crown of which arises in spring a branched, flowering stem, usually much taller and more vigorous than the flowering stems of the annual plants. The annual form is apparently produced by the weaker and later developed seeds formed in the fruit at the ends of the shoots; it is considered to be less active than the typical species and differs in being of dwarfed growth and having rather paler flowers.

Henbane will grow on most soils, in sandy spots near the sea, on chalky slopes, and in cultivation flourishing in a good loam. It is, however, invasive in its growth, the seeds being prone to lie dormant for a season or more, refusing to germinate at all in some places, and the crop varying without any apparent reason, sometimes dying in patches. In some maritime locations it can be grown without any trouble. It requires a light, moderately rich and well-drained soil for successful growth and an open, sunny situation, but does not want much attention beyond keeping the ground free from weeds. 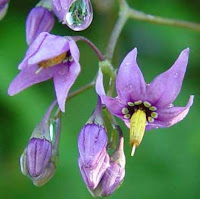 Atropa belladonna, commonly known as belladonna or deadly nightshade, is a perennial herbaceous plant in the nightshade family Solanaceae, which includes tomatoes, potatoes, and eggplant. It is native to Europe, North Africa, and Western Asia. Its distribution extends from Great Britain in the west to western Ukraine and the Iranian province of Gilan in the east. It is also naturalized and/or introduced in some parts of Canada and the United States. The foliage and berries are extremely toxic, containing tropane alkaloids. These toxins include atropine, scopolamine and hyoscyamine, which cause a bizarre delirium and hallucinations. Atropa belladonna has unpredictable effects. The antidote for belladonna poisoning is the same as for atropine.

It has a long history of use as a medicine, cosmetic, and poison. Before the Middle Ages, it was used as an anesthetic for surgery; the ancient Romans used it as a poison (the wife of Emperor Augustus and the wife of Claudius both were rumored to have used it for murder); and, predating this, it was used to make poison-tipped arrows. The genus name Atropa comes from Atropos ("unable to be turned aside"), one of the three Fates in Greek mythology, who cut the thread of life after her sisters had spun and measured it; and the name "bella donna" is derived from Italian and means "beautiful woman" because the herb was used in eye-drops by women to dilate the pupils of the eyes to make them appear seductive. 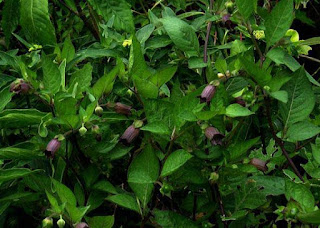 Belladonna was first found in the Southern and Central Europe. It is now cultivated in other parts of the world such as Sweden, Britain, North America, Asia, etc. In many countries, it is considered as a poisonous weed. In India too, belladonna is grown widely.

Mandragora officinarum is the type species of the plant genus Mandragora. It is often known as mandrake, although this name is also used for other plants. A mandrake is the root of a plant, historically derived either from plants of the genus Mandragora found in the Mediterranean region, or from other species, such as Bryonia alba, the English mandrake, which have similar properties. The plants from which the root is obtained are also called "mandrakes".

The name derives from the fact the branching root was often similar to the shape of a man. Mediterranean mandrakes are perennial herbaceous plants with ovate leaves arranged in a rosette, a thick upright root, often branched, and bell-shaped flowers followed by yellow or orange berries. They have been placed in different species by different authors. They are a variable perennial herbaceous plants with long thick roots (often branched) and almost no stem. The leaves are borne in a basal rosette, and are very variable in size and shape, with a maximum length of 18 inches. They are usually either elliptical in shape or wider towards the end, with varying degrees of hairiness.

Because mandrakes contain deliriant, hallucinogenic, tropane alkaloids and the shape of their roots often resembles human figures, they have been associated with a variety of superstitious practices throughout history. Accidental poisoning is not uncommon. Ingesting mandrake root is likely to have other adverse effects such as vomiting and diarrhea. In the past, mandrake was often made into amulets which were believed to bring good fortune, cure sterility, etc. In one superstition, people who pull up this root will be condemned to hell, and the mandrake root would scream as it was pulled from the ground, killing anyone who heard it.  Therefore, in the past, people have tied the roots to the bodies of animals and then used these animals to pull the roots from the soil. They have long been used in magick rituals, today also in contemporary pagan traditions such as Wicca and Odinism.

So burn your incense and keep away the hobgoblins and try not to get into too much mischief this Halloween.
Posted by Marcy Lautanen-Raleigh at 6:38 AM